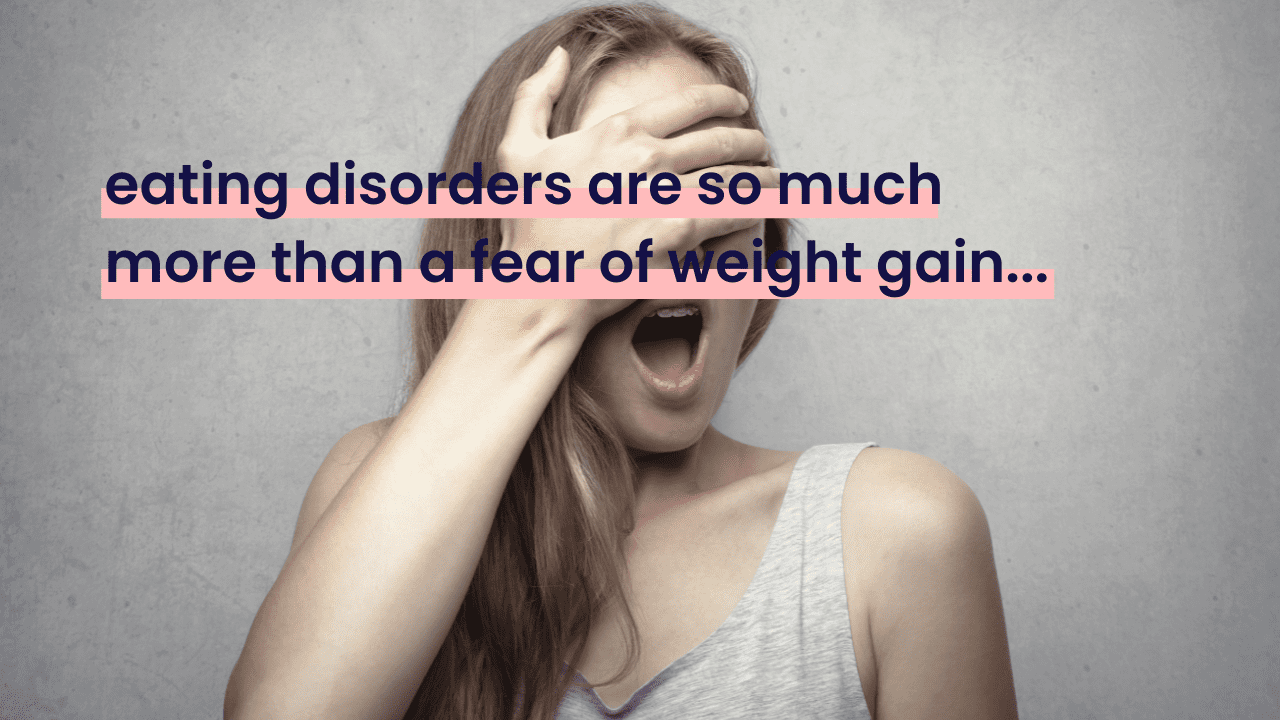 Do you ever catch yourself feeling ashamed of your eating disorder? Judging yourself for being “shallow” due to your fear of gaining weight? Criticising how much appearance means to you? Or, if you have a loved one struggling with an eating disorder or disordered eating, maybe you struggle to understand how they can be so consumed by how they look, and you’re convinced they should just choose to get over it.

Firstly let’s acknowledge: eating disorders are mental illnesses. You can’t just switch them on and off, it takes immense determination and self work in order to recover from an eating disorder.

While many eating disorders present (in part) as a preoccupation with body image, weight, size and shape, this is often masking the fact that there’s something else going on beneath the surface. Whatever the underlying cause of these behaviours may be, it has caused the affected individual to turn to disordered behaviours and rituals to compensate for emotional turmoil going on internally. Most people feel they don’t have any other coping strategies available to them other than to control and restrict food, or exercise compulsively. Hence, the development of these disordered behaviours, and the increasing reliance on them to help you cope with your own emotions, traumas and experiences over time.

So how do we know eating disorders go deeper than a fear of gaining weight?

1. They can affect people of any shape and size.

Think about it… If eating disorders can affect any body shape, size, weight, gender, appearance, then it stands to reason that they’re about more than weight gain. You cannot identify if a person is struggling with an eating disorder based on how they look or appear alone. Your body size alone doesn’t quantify whether you’re struggling with disordered eating, nor does restoring your weight and letting go of weight suppression signify you’re recovered. Eating disorders are so much more than weight. Even more so, some eating disorders don’t actually involve weight loss or gain whatsoever, but are more so characterised by the preoccupation or obsession with food and eating behaviours – demonstrating they’re much more than a fear of weight changes.

Even people living in smaller bodies which adhere to diet culture ideals and standards are at risk of disordered eating. If these people, who would still be “accepted” within the standards of diet culture and society, still struggle to accept their body and appearance, it is evident that disordered eating and eating disorders are driven by more than a fear of weight gain.

2. It’s about rejection and feeling unworthy.

For those who are terrified of gaining weight, it’s more than just the fact they think they’ll be “ugly” as a result of the changes to their body… It’s a fear of how they’ll be treated as a consequence. Often, it comes down to an intense fear you’ll be rejected, unloved or unworthy – in the opinions of others, or even in your own opinion – based on your changing appearance.

As humans, we’re hardwired to crave connection. So if we believe that our worth is defined by our body and appearance, then it stands to reason that our worth is threatened when this changes. The fear of losing the connections and relationships we hold so dear threatens everything at the core of being human, so while it may seem on the surface like it’s a fear of weight gain, it’s actually often a fear of the consequences of weight gain driving these behaviours.

Very few of us know how to sit in our emotions, let alone identify and process them when they arise. We fear “negative” or difficult emotions – anger, sadness, hurt, loneliness – and often look for ways to numb these feelings or experiences.

We’re programmed to avoid discomfort, and these emotions are the physical manifestation of discomfort… And in looking to numb them, we turn to other coping strategies – namely, disordered eating and exercise behaviours.

While these behaviours may initially be innocent enough, for example being comforted by a tub of ice cream after going through a break up, if we’re using them to avoid our emotions, they can quickly escalate and become obsessive. Soon, instead of looking to the ice cream for comfort in a difficult situation, you could feel yourself eating the tub of ice cream and then needing to compensate by exercising for 2 hours straight, or not eating anything else for the rest of the day. Because if you’re not able to identify, process and sit in your emotions (even the tricky ones!), you’ll have to deal with them in other, less healthy ways…

This is why developing alternative, healthier coping mechanisms is so critical in recovery. It means you don’t need to rely on or resort to disordered patterns, because you’re confident in your ability to survive all your emotions, and you know you’re strong enough to ride them out and you’ll be okay.

In this way, eating disorders are also often about control…

Similar to being a way to manage emotions, eating disorders offer the illusion of control for many people. If you feel like your life is out of control – your career, relationships, family life, self-esteem, whatever it may be – then rigidly controlling your eating or exercise habits can offer a sense of being in control when you feel like you’re drowning elsewhere.

In a world where you feel like everything else is beyond your control, restrictive or compulsive behaviours can provide a false sense of security, structure or routine. You may fear losing control of your identity if you gain weight, losing control over your emotions if you abandon your disordered “coping strategies”, losing control over your body size if you don’t stick to your rigid habits. So by adhering to the strict rules and restrictions you enforce upon yourself, you may feel “safe” in the knowledge that you can control your body – and potentially the opinions of others (and yourself) about you in the process.

In reality, we know that in eating disorders you experience a total loss of control, instead being at the mercy of the obsessive thoughts and rituals around food and exercise provided by the voice of your eating disorder. Only in recovery can you truly reclaim control over your life.

There’s a strong link between perfectionism and eating disorders. Those of us who identify as perfectionists tend to be overly critical of ourselves and our performance, and have an intense need for approval and acceptance. If you’re a perfectionist, it’s likely you’re driven by a fear of failure, and as a result you set continuously unrealistic standards and expectations for yourself to live up to. Then, you determine your self-worth on your ability to achieve these unreasonable standards, continuing to strive for these heights even when the consequences are disastrous.

If you view your mistakes as personal failures, you’re likely to think in an “all-or-nothing” manner, which can influence your tendency to develop disordered behaviours… Once you enter the cycle of black and white thinking, you tend to resort to extreme measures to achieve and prove your self-worth. For many of us, that looks like controlling how we look and act, in order to ensure approval from ourselves and from others.

Eating disorders are not a choice…

As you can see, no one chooses to develop an eating disorder. You do so out of necessity, trauma, inability to handle your emotions, or the very real need for a coping strategy that allows you to survive in a moment of need. It’s not just about an obsession with your body and your looks. It’s a whole lot more than that.

So before you judge yourself or someone else for being too preoccupied with aesthetics and weight gain, understand that this is just a symptom of the disease. There’s so much more going on beneath the surface…

Need some help understanding what’s going on for you, or working towards healing your relationship with your body, food and exercise? Sign up to our 1:1 coaching program today for personalised support and guidance to help you achieve full recovery, for good.

Learn to Nourish Your Body Without Guilt

Sarah King is an Exercise Physiologist and Health Coach specialising in helping women reconnect with their bodies and improve their relationship with food and exercise.

Through her 1:1 Health Coaching Sessions clients learn to nourish their bodies without guilt, move for joy, improve body image and self worth, and balance their hormones.

Click below to book your free discovery call and get started. 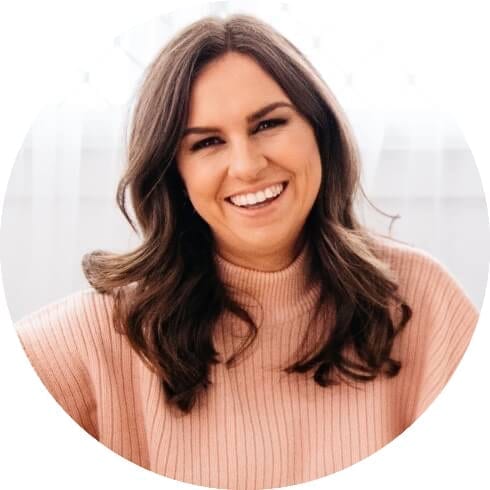 Science, not trends is the foundation of my approach. By nourishing the body and mind with scientific facts we can build foundations for a life of realness, not just wellness.

Stay in the Loop. Signup for the newsletter here

LISTEN TO MY LATEST PODCAST EPISODE:

188. How to Overcome the Social Pressure to Diet or Lose Weight for a Wedding

70% of women will diet in order to fit into their wedding dress and brides-to-be are more likely to diet than the average woman.  Now you might be thinking that it isn’t that bad because they will return to normal eating after the wedding day is over but according to...